Excessive sweating had bothered Scott for a number of years, with an active lifestyle and demanding working life, it was unavoidable.  At the age of 32, he decided that it was time to explore treatment to rid him of the daily problem that was impacting his life.

Scott always had to plan his wardrobe around colours that could disguise his underarm sweating.  He often felt embarrassed by the issue and frustrated at anti-perspirant deodorants that just didn’t alleviate the problem.

After researching treatment options, Scott visited our Glasgow clinic to find out more about our treatment for excessive sweating.

Known as Hyperhidrosis, this condition is very common and very treatable.  Around 3% of the UK population suffer from excessive sweating and often avoid doing things they would otherwise love to do because they are too embarrassed about their sweating.  A simple solution comes in the form of small injections of Botulinum Toxin, also known as Botox, which stops the glands from producing sweat. 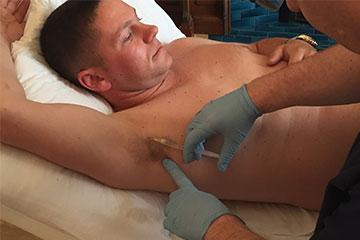 Dr Simon Connelly performed the injections on Scott, which only took around 30 minutes and was relatively pain free.

“I can’t believe how quick and easy it was! It’s virtually pain free and Dr Connolly talked me through it as he was doing the treatment, which put me more at ease.”

Only four days after the treatment Scott started to feel the effects.  He was able to wear a grey top for the first time in a number of years and found inner confidence in not worrying about wet stains coming from his under arms.

“I will definitely continue to have this treatment. I am delighted with the results and I’m looking forward to my first holiday in a long time where I can buy whatever colour of shirt or t-shirt without trying to hide how much I am sweating!”

We all know that sweating is a natural and normal function of the human body.

But for some people it goes beyond getting a bit hot and sticky on the tube.

Around two million people in the UK suffer from hyperhidrosis, or excess sweating, and for them it can be a serious source of embarrassment.

With summer well and truly here, Consultant Dermatologist at The Private Clinic of Harley Street, Dr Noor Almaani, provides an insight into how making a few simple lifestyle changes could ease the problem:

Try to reduce your caffeine intake and spices as these foods can activate neurotransmitters, called acetylcholine which can stimulate your sweat glands.

Apply prescription-strength antiperspirant such as those containing aluminium chloride like Driclor.

This should be ideally applied when sweating is minimal i.e. before going to bed and after a cold shower.

Application can be built up from twice weekly to daily if necessary.

This can be applied to other areas of the body such as the palms and soles (avoid face and genital area).

If you are prone to sweating, try to wear loose, stain resistant and breathable clothes.

And if your feet are especially sweaty try silver-lined socks and absorbent insoles.

Some medications can lead to increased sweating such as steroids, antidepressants, nicotinamide (Vitamin B3) and opioids so consult your GP.

If antiperspirants aren’t working you can ask your doctor about medical treatments such as Botox injections which can banish excessive sweating for up to a year.

For more information about this treatment please visit theprivateclinic.co.uk

Put an end to pesky perspiration

As the mercury rises, so does the possibility of sweat-related embarrassment. Nobody wants to be the smelly guy on the train or the man in the meeting with a pit-stained shirt. We asked Dr. Noor Almaani at The Private Clinic of Harley Street how to combat the problem, beyond the use of standard antiperspirant.

What you put in your body comes out – one way or another. Dr. Almaani’s key tip? “Reduce caffeine intake and spicy food.”

If you’re always sweaty, your usual spray may not be helping. “Apply prescription-strength antiperspirant such as those containing aluminium chloride,” says Dr. Almaani. “Application can be built up from twice weekly to daily if necessary. This can be applied to other areas of the body, such as the palms and soles of the feet.”

Your wardrobe choices may not be helping you, either. Dr. Almaani recommends wearing “loose, stain-resistant and breathable clothes”. And if your feet are especially sweaty? “Silver-lined socks and absorbant insoles.”

That prescription could be having an adverse effect too. “Some medications, such as steroids, antidepressants, nicotinamide [vitamin B3] and opioids, can lead to increased sweating, so consult your DP,” says Dr. Almaani.

Philippa Nightingale dreads meeting new people. She’s an amusing, articulate, friendly 36 year old, but her body is clammy with sweat most of the time. Sometimes her hands drip. Shaking hands is a trial, she says, and causes people to pull back from her.

As a child, she was mortified by the wet patches on the back of her school dress that showed up when she got off her chair. All her light Nightingale has suffered from hyper-hidrosis, a condition that affects one in a hundred of us. It is caused by a defect in the part of the nervous system that controls sweating and causes excessive perspiration from the face, hands, feet and armpits.

Nightingale suffers from what is known as secondary hyperhidrosis, in which the whole body sweats excessively as a side-effect of another problem, such as low blood sugar, heart disease, or, in her case, anxiety.

As a character she is a natural rebel, home-schooling her children and avoiding conformity wherever she can, but this bravado covers up an anxious personality. Facing the prospect of this interview made her feel clammy all morning.

A “horrible sabotage” is the way she describes her body’s reactions. Generally, it’s not temperature that prompts the sweating, but situations. “I had sweaty hands and feet as a child, then it started affecting my whole body at puberty. Because my father has it mildly, and my sister has it on her hands and feet, we never talked about it; we all just got on with it”, she says. “The weird thing is my hands and feet are pouring with sweat but they are icy cold. It’s clammy around my face and the back of my neck, and my hands and feet drip. Talking and thinking about it brings it on. If I know I have to stand it a queue, I will start sweating.”

Nightingale chooses clothes that hide the sweat patches, but her face appears shiny, with small beads of sweat on her nose and forehead, and her hands feel cold and wet.

She has been with her partner Martin for eight years. “I told him straight away about the sweating because I always have to say ‘Oh sorry, I have really sweaty hands’ whenever I shake hands with a new person. It doesn’t bother him in the slightest. We have seven year old twins, and they comment about Mummy’s sweaty hands – but they are quite happy to hold them.”

Nightingale sells imported Indian and Thai jewellery at markets local to her home in Trowbridge, Wiltshire. Buying trips to India in extreme temperatures means that her sweating moves to a new level. “I have to accept that I am just going to feel like a sponge the whole time I’m there,” she says “But back here in the local markets, I’m fine. My stall is my space, where I feel confident, and I don’t have to do very much that involves interacting with people. I once ruined a job interview because I was wearing clothes that showed up my sweat and I started worrying so much about it that I got really flustered. ‘There are so many hang-ups about sweating. People associate it with being dirty or smelly.”

TREATMENTS ARE HARD TO COME BY
Hyperhidrosis generally starts in childhood or during puberty, with patients experiencing a heightened reaction to sweating stimuli such as anxiety, pain, exercise, tension, caffeine or nicotine. Medical help is not always easy to come by; treatment is controversial because each case seems to be slightly different, and all too often sufferers never find a cure that works for them. The condition was not taken seriously for many years and proper research has been undertaken only recently. It turns out that Botox is one of the most effective cures for secondary hyperhidrosis, but Nightingale cannot afford the repeat treatments, which cost about £400, up to four times a year. Her GP suggested a powerful antiperspirant called Driclor, which had no effect on her.

Although other treatments are available, Nightingale has not pursued them as hard as she might. This is typical of the hyperhidrosis sufferer, fewer than 40 per cent of them seek medical help. “You grow up with it and you think there are just so many things that are so much worse that people need proper medical treatment for,” she says.

The condition was rarely mentioned at home, partly because the problem doesn’t occur so acutely in family situations, when people are feeling more relaxed. But also, Nightingale says, “We’re the sort of family that doesn’t make a fuss. My father would always say, ‘There are much worse things we could have’. He would never have dreamt of getting treatment for it. I think I felt a bit guilty or self-indulgent for worrying about it.”

The condition can be very uncomfortable and even painful, as the skin is permanently damp. When the palms and soles are involved, the skin may crack or scale. But thankfully, the perspiration does not smell. “I can sweat all day and in the evening there is no smell. It’s almost like water.” Nightingale says.

But although she has been stoical about her condition, she is coming to the end of her acceptance, partly because she believes her children may also have inherited it. “I don’t want them to have to go through all this, and that’s made me realise that I don’t want to go through it any more either”, she explains.

Nightingale believes the key to curing her condition is to find a way of controlling her feelings and anxieties.

“It’s a confidence thing. I need to stop worrying,” she says. In the past she has been known to resort to a stiff drink to achieve this, but now she is looking into healthier options such as hypnotherapy.