What happens in nipple correction surgery?

Nipple Correction surgery is a popular choice for many men or women who have unhappy with the shape or size of their nipple. Here at The Private Clinic we offer nipple reduction or inverted and flat nipple correction procedures

What is Inverted or Flat Nipple Surgery?

Inverted nipples or flat nipples affect 10 to 20 percent of women. It is caused by an inward traction of the milk ducts and the traction of the muscle within the nipple which pulls the nipple in. There are 3 different grades for inverted nipple starting from grade 1 which can usually be improved with non-surgical options such as the niplette device to the more severe grade 3 which will require surgery to fix.
Inverted nipple and flat nipple correction surgery is a very simple procedure that is performed under local anaesthetic. It involves the surgeon making an incision around the nipple before then dividing or separating the ducts which will then allow the nipple to sit naturally. You will then have dissolvable internal stitches hold the nipple in position whilst it is healing. 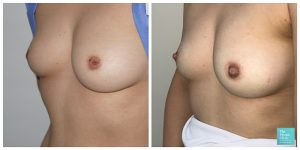 What is Nipple Reduction Surgery?

Nipple reduction procedures are increasing in popularity for both men and women more recently. Many patients seek nipple reduction procedures when they feel their nipple/s protrude too much, are too wide or are uneven in shape. Having puffy or prominent nipples can cause patients to feel self-conscious wearing certain types of clothing or for men to have the confident to reveal their bare chest in public.
A nipple reduction is usually performed under local anaesthetic. It is a relatively quick and simple procedure that involves removing part of the nipple tissue. The scars after nipple reduction surgery are often hidden on the underside of the nipple where it meets the areola so for many, no one will be able to tell you have any sort of procedure. 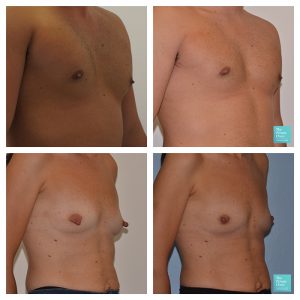 What is the downtime for nipple correction procedures?

The downtime after nipple correction procedures is very minimal with many patients only taking 1-2 days off work to recovery. You may experience some mild discomfort once the anaesthetic from surgery has worn off but this should soon subside and your dressings will be able to be removed after a week.
Nipple Correction Surgery at The Private Clinic
We have a team of industry-leading, highly experienced plastic surgeons;

Cosmetic Procedures for the Nipples When you think of underdoing cosmetic surgery many assume the major procedures the breast surgery, facelifts or tummy tucks for…
What happens in nipple correction surgery? Nipple Correction surgery is a popular choice for many men or women who have unhappy with the shape or size…
The facts on Nipple surgery Nipple correction surgery can be the solution for a range of nipple-related conditions such as inverted, flat, depressed, protruding or…
View all Blog & News