Sagging breasts are a natural consequence of aging and the severity of them will vary from person to person. Factors which kick start the process can include weight loss and pregnancy but for some early sagging may have already occurred due to the effects of gravity.

Breast ptosis as it is medically known, is a very common condition that can be diagnosed in a range of stages and grades from mild to advanced.  Unfortunately breasts are actually an external organ to the body and no amount of exercise will realistically be able to improve their shape – so what are your options?

What is a mastopexy?

A mastopexy, or breast uplift as it is more commonly known, is a procedure where the natural breast is lifted to a higher position. This is usually recommended for patients who are happy with the volume of their breasts but want a more uplifted appearance.

What does the procedure involve?

During the procedure, which is performed under general anaesthetic, only skin is removed from the breast instead of the tissue. This means the original breast tissue is reshaped with the aim to produce a more rounded and uplifted look. The nipple may also move to a new position to give the result of a lifted bust. 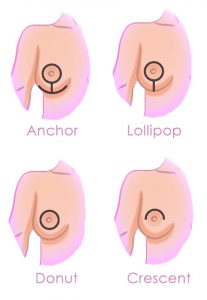 There is more noticeable scarring after a mastopexy compared to a breast augmentation. There will be scarring around the circumference of the areola which will then continue in a line down the lower portion of the breast and then spread out to both sides in the sub-mammary groove underneath the bust. This is known as an anchor scar, occasionally a mastopexy will result in a lollipop scar which is just a scar around the areola and then down the lower portion of the bust, this scar usually means that only a small amount of skin was removed.

Other scars include the Donut which is a scar all the way around the areola and the Crescent which is a scar just on the top arch of the areola. Only your surgeon will be able to tell you which scar to expect as it will all depend on the amount of skin that needs to be removed to give you the desired result.

Will I be able to breastfeed after the procedure?

It is highly recommend that you finish your family before having this operation for both this reason and also to avoid any future revision surgery. If you become pregnant after having this procedure, there is a chance that your breasts will enlarge and stretch the skin again taking you back to a drooped appearance.

Is it possible to have a breast augmentation at the same time?

It is possible for both of these procedures to be performed at the same time. Sometimes a breast augmentation alone is not enough to get the results desires so often a mastopexy is suggested too. There are then two different options for performing these procedures.

Performing the procedures together is possible, and is successful in many patients, however it does run an increased risk of capsular contraction, problematic scarring and reduced sensitivity of the nipple. Your surgeon may suggest a two-stage-procedure which would lower the risk of these, but it does mean you would need two separate operations around six months apart.

It is not uncommon for patients to then decide not to go ahead with the breast augmentation as they are happy with their results after the breast uplift alone. 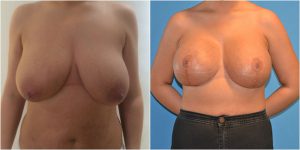 Some of the UK’s most talented and experienced Plastic Surgeons work with us to bring you effective results. Our clinics are located around the UK including; London, Birmingham, Bristol, Leeds, Manchester, Glasgow, Buckinghamshire and Northampton.

What is a breast uplift?

What is a breast uplift? A breast uplift, mastopexy or breast lift as it may also be referred to, is a plastic surgery procedure designed

For many patients, the issues they have with their breasts is not always the size but narrows down more to the loss of volume and

The loss of breast volume and increased sagginess can result following pregnancy, weight loss or can also be due to age. The condition of loss

Do I need implants with my Breast Uplift?