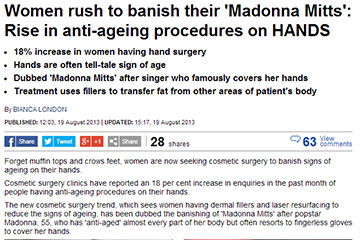 Forget muffin tops and crows feet, women are now seeking cosmetic surgery to banish signs of ageing on their hands.

Cosmetic surgery clinics have reported an 18 per cent increase in enquiries in the past month of people having anti-ageing procedures on their hands.

The new cosmetic surgery trend, which sees women having dermal fillers and laser resurfacing to reduce the signs of ageing, has been dubbed the banishing of ‘Madonna Mitts’ after popstar Madonna, 55, who has ‘anti-aged’ almost every part of her body but often resorts to fingerless gloves to cover her hands.

As the years pass, skin on the hands thins, causing veins to become more prominent and liver spots to appear.

While make-up can disguise tell-tale signs of ageing on the face, it’s more difficult with hands – which is why it’s often said that hands are the best indicator of age.

Speaking about the latest cosmetic trend, a spokesman for the Transform clinic, which has seen an 18 per cent increase in the number of anti-ageing hand procedures perforemed, said: ‘Our hands are exposed to the sun more frequently than other parts of the body and a failure to apply sun cream to hands as regularly as we do the face makes them susceptible to sunspots and accelerated aging.

‘With the hot weather this summer we have experienced a marked increase in inquiries from women complaining of sunspots on their hands, along with the skin becoming thin and crepey.

‘Hand rejuvenation is becoming increasingly popular, with dermal fillers volumising and smoothing the skin, encouraging the production of collagen to provide a youthful look.

‘Laser resurfacing of the hands is also on the rise thanks to its ability to improve sun-damaged skin and reduce the appearance of sunspots.’

The Private Clinic on Harley Street also offer a treatment to rejuvenate the hands and have seen a surge in enquiries.

Their procedure takes fat from one part of the patient’s body and injects it into the hands. It is done while the patient is awake and is designed to give long term rejuvenation benefits to the hands. 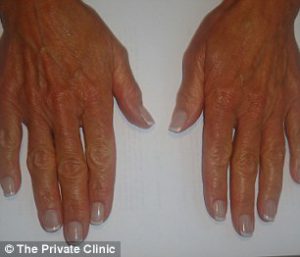 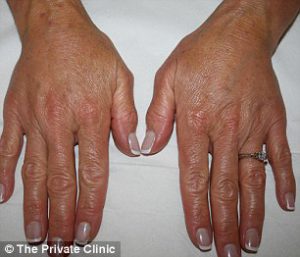 Sandy Benson, 54, also had similar surgery at Transform because felt she was being constantly aged by her hands, which over the years have lost their youthful look so opted for the surgery.

She said: ‘Madonna is a great example of a woman who is trying to take care of herself in her 50s just like me.

‘I can completely sympathise that her hands are the bit that gives it all away.

‘My hands were thin and veiny and just looked much older than the rest of me.

‘I’d abused them over the years and never taken care of them and as I got older they slowly got worse.

‘Your hands are difficult part of your body, there’s not a lot you can do with them to help and they’re always exposed.

‘I tried lots of creams, but they never worked. You can slather it on all you like but it doesn’t put back the plumpness or elasticity.

‘Your hands tell the story, everywhere else was fine as I could work on that by going to the gym and taking care of myself but my hands had driven me mad for quite a while.

‘I do sympathise with Madonna, it’s terrible when you work so hard and this one thing keeps letting you down.

‘For me it got to the point where I would wear long sleeves and be pulling the cuffs down over my wrists because I don’t like them.

‘I would often fold my wrists in as well so people couldn’t see my hands.’

After doing nearly a year’s worth of research Sandy opted for X fillers and decided to go to Transform and banish her ageing hands.

The procedure- where filler is injected into the skin- takes around 30 minutes to be completed and claims to give instant results.

And now Sandy believe her hands look even better than Madonna’s.

She said: ‘Now I’m much more confident, I don’t hide my hands away as much as they are better.

Dr Dennis Wolf, Joint Medical Director and fat transfer specialist at The Private Clinic of Harley Street, said: ‘It is common for women, as they grow older, to lose weight in their hands, which means that veins and wrinkles can become more evident. Prolonged exposure to the sun will also speed up the ageing process.

‘And while treatments like laser resurfacing to target the signs of ageing, or traditional fillers to make the hands appear fuller and healthier, can offer effective results, these can really only ever offer a temporary solution. 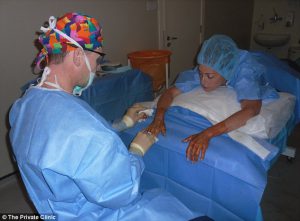 ‘A more long terms solution is fat transfer – a technique which is fast becoming one of the most popular for hand rejuvenation purposes. The procedure uses advanced technology to produce a pure and effective fat graft, which means that fat can safely be taken from one area of the patient’s body, such as their thighs or stomach, and injected into the hands.

‘The fact that the procedure is minimally invasive is also an important factor. Many patients have careers which do not allow for them to be away from work for long periods of time. Fat transfer is a walk-in, walk-out procedure and one which is performed under local anaesthetic, so patients can undergo treatment without too much disruption to their lives.

‘Over time I expect to see procedures such as this continue to grow in popularity, as women decide to invest further in different aspects of their appearance, later into life.’

How much fat is required for fat transfer?

Most of us have said it at some time or another: “if only I could take fat from here and just move it here”. Not everyone, 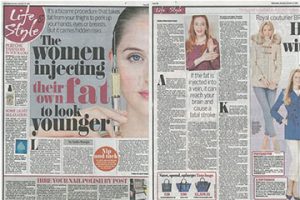 The women injecting their own fat to look younger

Daily Mail Looking down at the exquisite diamond twinkling on her finger, Rosetta Citton’s heart sank. The 59-year-old jewellery designer had slipped on the eternity

Does my bum look big in this? Fat transfer to the buttocks explained.

‘Does my bum look big in this?’ Anyone who answered ‘yes’ to the eternal question a decade or two ago will know it wasn’t exactly

Does fat transfer to the breasts really work?

If you’re contemplating whether to have a cosmetic procedure or not, there’s probably two important factors on your mind. First and foremost should always be your safety