Tribal ear surgery is actually one of the fastest-growing cosmetic procedures within the UK. Ear stretching was previously a rising trend but now many with tribal ear piercing are experiencing difficulty seeking employment.

What are Tribal Ears?

Tribal Ears are an alternative name for an ear piercing technique known as ear stretching. It involves placing a cone-shaped taper into a previous piercing in the ear which is then gradually increased in size stretching the hole.

The tribal reference most likely comes from the ear stretching techniques history with the Maasai tribes of Kenya and Huaorani tribes of the Amazon to name a few. 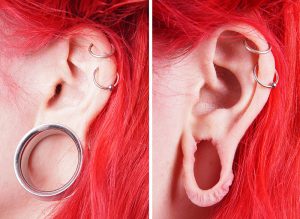 How are tribal ears corrected?

Tribal or stretched earlobes are corrected by earlobe repair surgery that is often performed under local anaesthetic. An incision is made in the stretched earlobes before a section is removed and then stitched to repair the affected area.  It is a relatively quick procedure taking around 20-30 minutes.

You can see a tribal earlobe procedure being performed here

Why would you want to correct tribal ears?

Stretched earlobes do not generally occur naturally and work and time has often gone in to creating the appearance of them. In some cases if the earlobe was not stretched significantly then you may be able to remove the plug holding the shape and it will eventually shrink back to a presentable size, but if the stretched earlobe is too large then a surgical procedure will be required to fix it.

The majority of patients who want their stretched earlobes corrected are slightly older or are starting their working life and complain that they feel their job options are limited because of the piercing and some patients complain of keloid scarring caused by the stretching of the skin. 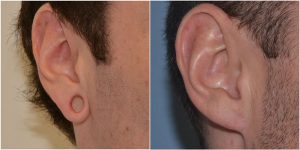 The Private Clinic patient, Sam came to visit us feeling deflated after being rejected from countless jobs. Sam had his first earlobe stretchers put in after being inspired by his favourite heavy metal heroes.

Sam was becoming tiresome of the ‘disapproving looks’ from people in the street and with people constantly asking about the appearance of his ears.

Working in a high street store, he had a keen interest in finding a career in engineering but felt his rockstar image was ruining his career chances.

“I’ve avoided applying for jobs in the past because mentally, I already felt defeated. I was also sick of the questions, with people constantly asking about my ears.

‘I think my friends who have earlobe stretchers are not moving up as fast in the workplace, or not reaching their full potential, because of their ears. I believe in self-expression but realise now that it is not worth my future.”

Sam finally decided to go ahead with Tribal ear correction surgery at our Fitzroy hospital in London with Consultant Plastic Surgeon, Mr Adrian Richards who said;

“Before they come to see me, many people put off the process for years, believing that any corrective procedure would be painful and expensive. But, in reality, this is an issue that can often be corrected quickly and simply, without the need for a painful operation or lengthy downtime.” 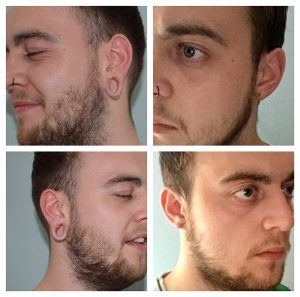 Sam is now enjoying his new appearance and feels the 30 minute procedure has opened up a wider range of options and career opportunities.

The earlobe is a delicate area that can be split due to heavy earrings. Split earlobes can be caused by trauma, this is what happens when the piercing hole is stretched by heavy earrings. People with thin earlobes are more likely to have this issue. 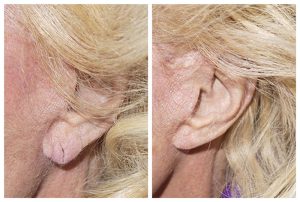 What is Earlobe Repair Surgery?

Earlobe repair or split earlobe surgery is a speedy and simple procedure to correct split or stretched earlobes. The procedure is performed under local anaesthetic and only takes between 20-30 minutes to be performed.

Sonia one of our patients at The Private Clinic was feeling self-conscious about the appearance of her earlobes constantly having to cover them up with her hair. Sonia then decided to research what could be done about them and came across The Private Clinic.  During consultation it was discussed with Sonia that if she decided to go ahead with the procedure it would be performed under local anaesthetic as a day case procedure.

“I was only in there for 20 or so minutes, it was so relaxing and within a few minutes it was all done – everything was fixed!”

Where can I have Earlobe Repair Surgery and Tribal Ear correction?

To find out more about earlobe repair or to book a free consultation please call 0333 920 9135 or click here.