When Anthea was first considering surgery she sought the advice of a trusted friend, who is a doctor herself. She was told that the man to see was Mr Adrian Richards. Ever since she met Adrian all those years ago, she has felt confident in his expertise.

“The most important thing for me is knowing that you’re in a safe pair of hands, whatever treatment you’re having, and that’s how I feel when I come to The Private Clinic”

Anthea recently decided that it was time to do something about her thread veins and The Private Clinic was the first place she turned. 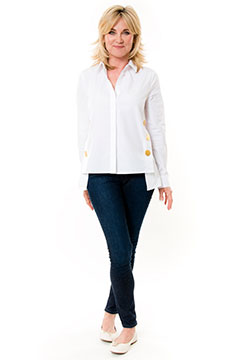 How long have you had noticeable veins for?
The veins on the backs of my legs have become more visible I would say, over the last three years.

What kind of veins are they and where do they appear on your body?
They appear on the backs of my legs and although they are not raised, their greeny colour is very noticeable, more so than a few years ago.  At my consultation I was told that they were in fact thread veins.

Do your veins affect your line of work in any way, for example, your confidence when on TV?
My veins do not affect my confidence and I wouldn’t say I actively avoid wearing any particular type of clothing. The real problem is that they are much more notable in the Summer, when you want to be able to bare your legs. They do not bother me in the Winter because what girl doesn’t love a pair of black opaque tights?! I wear tights and trousers in the winter but it’s when we take off our tights ready for Summer that we think, oh, what happened there?! You think to yourself, what am I going to do?

What made you decide to get your veins treated?
I am a big believer in tidying up as you go along. Little tweaks here and there. 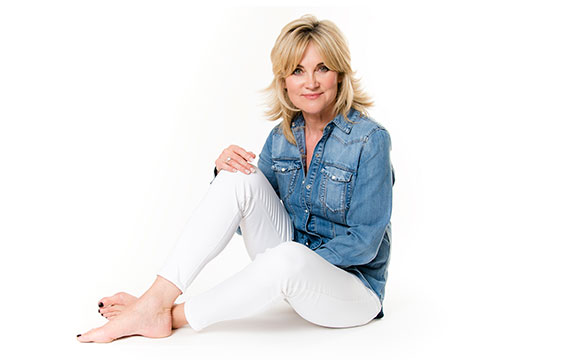 Why did you choose to have them treated with The Private Clinic and why did you make the decision, now, to seek treatment?
It was the best time to opt for a vein removal treatment. If it’s something you are considering then having the treatment done during the Autumn/Winter months means no sunlight will show up any scars and you can wear trousers to cover up if you have to wear any bandages.

I have previously had a procedure with The Private Clinic and I feel very confident with them because I know Mr Richards surrounds himself with a team of excellent experts and Mr Dynesh Rittoo was great.

What positive impact will this treatment have on you, if any?
I am already looking forward to next summer!

Would you recommend The Private Clinic?
Having worked in the industry for as long as I have, I’ve had access to a lot of information, whether it be the best hairdressers or the best plastic surgeons! My friends always ask for my recommendations and I’ll always send them to The Private Clinic.

An astonishing 30 per cent of adults have unsightly legs due to varicose veins. But now a revolutionary new procedure using a ‘Star Wars’ laser called EVLT (Endovenous Laser Treatment) could cure the suffering within just five weeks.

Sarah Woods noticed she had varicose veins when she was just 18. A few appeared at the same time on both legs and were slightly raised but not ‘knobbly’, and not bad enough for her to want to stop wearing skirts.

However, nine years ago, when Sarah was 25 and pregnant with her first child, Robbie, her legs felt sore and looked bruised.

After the birth, Sarah – a dental nurse from Sevenoaks, Kent – noticed that the veins were more prominent and she became self-conscious about them.

‘I began to hate my legs and they became progressively worse, all knobbly and unsightly. I stopped wearing skirts. I didn’t want to look at them myself, let alone have anyone else see them.’

Then, last October, Sarah read an article about EVLT. This laser could, apparently, remove the veins with less discomfort than older procedures and boasted a 97 per cent success rate.

She saw Dr Constantinos Kyriakides, consultant vascular surgeon at The Private Clinic and Barts and The London NHS Trust, who scanned her legs with an ultrasound machine and said the veins were ‘very bad in both legs but worse in the right than the left’.

He felt confident, however, that he could remove the veins and within two weeks, Sarah was having treatment.

‘I was so nervous,’ she says. ‘I had been warned that the procedure would be uncomfortable.’

Dr Kyriakides had explained that the ultrasound also highlights the surrounding blood flow, local anaesthetic is then injected along the length of the offending vein and a very thin catheter is inserted into it, through which the laser energy is sent.

‘When Dr Kyriakides marked up my leg with a felt-tip pen, I didn’t want to look,’ says Sarah. ‘But then curiosity got the better of me and I watched as some local anaesthetic was injected into my legs.

‘Then, he used the laser – which looked like a Star Wars fibre-optic wand – passing it through my skin into the vein from the calf to the top of the thigh, firing it up to seal the vein.

‘He then injected more local anaesthetic over the smaller knobbly veins and made tiny punctures with a small needle, from which he pulled them out with small forceps. I had lots of little puncture marks.

‘Then I was strapped up tightly with surgical stockings to keep the legs compressed to minimise bruising and was told to walk for 20 minutes before leaving the clinic, having been there for around two hours.

‘I wasn’t too sore at first but after three days the strapping came off and I just had the stockings on which made my legs feel very tender and my toes tingled.

‘But I was so relieved to see only some bruising and lots of little plasters where the small punctures had been, and I could see that those horrible gnarled, knobbly veins had gone. It took five weeks for all the bruising and marks to disappear.’

But what are varicose veins? ‘They are large, distended superficial veins, which are not properly returning blood from the lower leg to the heart,’ says Dr Kyriakides.

‘When these valves fail to function properly and become “leaky”, blood overfills and distends the veins, which can be seen bulging under the skin.

‘They can affect most age groups with up to 50 per cent of sufferers aged 50 and over. They are more common in women and can be triggered by pregnancy but most commonly – as in Sarah’s case – they are hereditary.

‘They can get inflamed, causing a condition referred to as superficial thrombophlebitis and, rarely, they can bleed. Chronic venous insufficiency is a term used when varicose veins become severe, and if left untreated can cause skin ulceration that can be difficult to manage.’

Dr Kyriakides adds that those with varicose veins have a slightly increased risk of deepvein thrombosis, but that it is still safe to take the contraceptive Pill and that being on your feet a lot, crossing your legs or playing sport cannot cause them.

Sarah can now wear skirts, shorts and swimsuits to show off her vein-free legs. ‘I’m absolutely delighted,’ she says.