LONDONERS are still forking out for facelifts and boob jobs despite the Brexit vote, according to the boss of a plastic surgery firm, which today unvieled plans to open its first hospital.

The EU vote has caused a slowdown in luxury spending by Brits but Valentina Petrone, chief executive of The Private Clinic, insists demand for cosmetic surgery remains robust.

“There is always a worry that a challenging financial climate might have an impact on spending, and Brexit has added an element of uncertainty.” Petrone said.

“However, this sector has proven to be very resilient to adverse financial environments, and it was true throughout the recession. So I feel quite confident about it.”

The Private Clinic, based in Harley Street and owned by private-equity firm BlueGem, plans to open a-state-of-the-art day admission hospital in Fitzroy Square, including two operating theatres – which the clinics don’t have. The group has just brought Aurora Clinics, making it the UK’s second-biggest cosmetic surgery group, with 140 staff in 12 clinics. 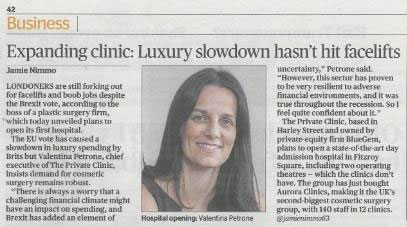